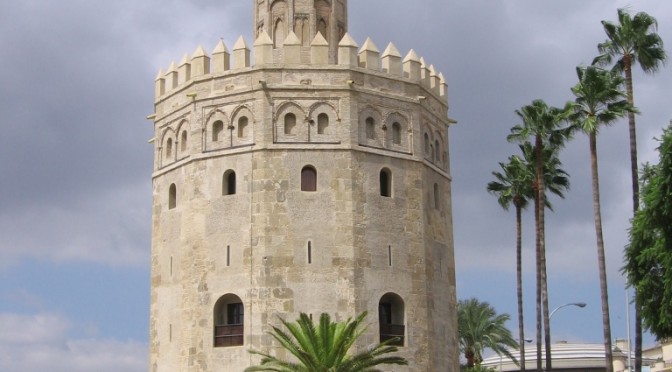 Torre del Oro de Sevilla was built in the first third of the thirteenth century, in the last moments of the Taifa kingdoms. Its Arabic name was Borg-to-Azajal , who came to express the golden tiles lining the sun was gleaming like gold and reflected in the river damaging sight.

Abu-l-Ulà Idris al-Mamun was the Almohad governor who in 1220 ordered the building to defend the city. Also closed the harbor entrance with a thick chain across the river and held in another tower (now defunct) on the bank of Triana . This chain was the one who left Mariners Ramón de Bonifaz in 1248 with the fleet of the Reconquista.

Legend has it that Torre del Oro served as a refuge for the ladies courted the King Pedro I the Cruel whose most famous affair was that of Doña Aldonza , sister of Doña Maria Coronel , who lived here in Torre del Oro while his wife María de Padilla lived in the Alcázar. Later became our memorial chapel and prison. Architecturally, it is dodecagonal plant. It has three bodies: the highest circular, the second is of hexagonal bricks and ceramic decoration possessing recuadrando green ribbons in bows (grata innovation at the time) and the first three floors covered overlap with vaults.

Over the years, the abandonment was primed with the Tower. Thus came the XVI century in a ruinous state, which forced her to perform an important work of consolidation. With it, you could reach the eighteenth, when the terrible earthquake of Lisbon (1755) shook the city and the tower severely affected. Were critical moments for future survival, because although in 1760 the damages were repaired and added the upper body shortly before the wizard Marquis De Monte Real demolition was raised to widen the car ride horse and in order to make way for San Telmo to Puente de Triana straighter. The strong opposition of the people of Sevilla (came to the king) prevent such destruction was committed.

A subsequent death threat it came from the hands of the Revolution of 1868, whose revolutionary, who rushed the demolition of the canvases of walls, went on sale to leverage their rubble. Again popular opposition was the one that caused the Tower endure.

Today, Torre del Oro is so iconic for Sevilla as herself Giralda . It features a Naval Museum that displays various objects and pieces related to marine life and Seville is indisputable and iconic landmark for the city, which gives extraordinary views from Los Remedios and Triana .